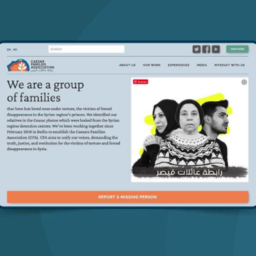 This association brings together Syrian families of detainees who were killed under torture in Assad Regime’s detention centers. The project is run by SCM, a Paris-based NGO which promotes freedom, justice and equality.

We filled this logo with emotional power as the various layers express the phases of the families’ struggle, from disappearance to justice. The first layer represents victims laying dead on the ground. The blue layer represents them resting in peace as they have received justice.⁣⁣⁣

With the CFA’s website we aimed at providing the association with a soothing digital space that can inspire hope and bring forth the spirit of coming together as one.