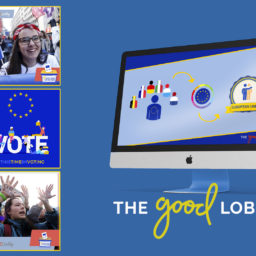 We worked with Brussels-based NGO The Good Lobby on the 2019 European Parliament Elections campaign #thistimeimvoting. We drafter a general communication strategy focused on social media using a mix of recycled video contents and new contents.

As The Good Lobby is dedicated to promoting citizen lobbying, we wanted to amplify the narrative in order to highlight the importance of exercising one’s voting power. As we couldn’t produce new contents due to logistical limitations, we compiled the video materials already created by the brand to create a narrative that would work on social media. The organization’s material was reworked and combine with stock footage and promoted across Facebook, Instagram and Twitter.

We also crafted a series of informational motion graphic videos aimed at explaining the mechanisms of the European Union, what citizens were asked to vote for and to which aim.

On the day of the elections, the videos were projected on a giant flat screen outside of the European Parliament in Brussels, gathering hundreds of viewers.